The Khayalethu Project Social Worker, Thobeka Majola said she started 2020 with young men who spoke in one voice, saying enough is enough with drugs and substance abuse. Majola said she gets excited over young people who take control over their lives.

“Khayalethu project has sent at least four boys aged between 14 and 17 years to rehab at the beginning of January 2020. The boys are expected to complete the rehab program at the end of April 2020”, explained Majola. She added that the project works closely with schools in ensuring that the beneficiaries who are at rehab continue with their studies while they are away. “School work, assignments and test are send to the beneficiaries and social workers assist and ensure that their work is submitted to their respective schools”, she said.

Majola stated that they hope to assist and support more boys and girls who wants to quit drugs and other substances. “Our doors are always open for those who may be in need of our programs. I urge young people to love and take care of themselves and to be sensitive to things that may influence their health and lives negatively”, said Majola.

Nhlakanipho Vidima’s mother, Hlengiwe Vidima said her son was the rehab program beneficiary and has changed completely. “Khayalethu social worker sent my son to rehab sometime last after visiting their offices seeking for help. My son was on drugs and stole from us but after going to rehab it’s a different story. Nhlaka passed grade 8 after he repeated it several times. He has been clean since last year towards the end of the year until now. He helps with the house chores and attends school regularly. We can leave our items and money freely in the house without them going missing”, said Vidima. 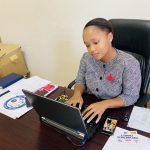